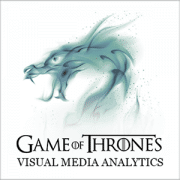 Game of Thrones – Unpredictable characters, political intrigues and complex social relations are key ingredients behind the success of HBO’s fantasy series. An active exchange on social media results in heated online discussions among the fans of the series. With Westeros Sentinel, webLyzard provides PDF reports and a visual dashboard to explore the online dialog – continuously extended by new components from the ReTV research project. Updated ahead of the series’ eights and final season, the system is named after the fictional continent Westeros, which is home to the capital and a central hub of the storyline.

Try out Westeros Sentinel at got.weblyzard.com

“Westeros Sentinel uses the webLyzard Web intelligence platform to better understand viewer engagement by analyzing user-generated content streams”, explained Prof. Arno Scharl, Managing Director of webLyzard technology. “We have chosen the popular television series Game of Thrones as a showcase, because it has established a reputation for lively and animated discussions via social media platforms”. The system aggregates postings from these platforms in real time, and combines them with the latest news articles. It determines the sentiment of comments about fictional characters automatically, and provides an interactive dashboard with trend charts and visual analytics components.

The platform addresses changes in the media landscape, and the significant impact of social media on the viewing experience. Television programming professionals no longer measure the success of a show such as HBO Game of Thrones merely by the size of the audience, but rather by engagement. Social media allow audiences, critics, actors, producers, and marketers alike to share experiences, discuss important events, express views and provide interpretations.

Westeros Sentinel captures this social engagement around Game of Thrones and provides a much deeper insight into evolving viewer perceptions and opinions. Advanced text mining tools provide an unprecedented level of transparency about emerging trends. They reveal how new plot elements trigger and shape discussions, for example, or how real-world events such as an actor’s public appearance at an award ceremony affect viewer sentiment.

The webLyzard dashboard customized for Westeros Sentinel goes beyond simple charts and statistical representations. Multiple coordinated view technology supports different types of information seeking behavior such as browsing, searching, and trend monitoring. Real-time synchronization mechanisms help to analyze and organize the extracted knowledge. The dashboard not only shows how often viewers mention fictional characters, but also highlights concepts that the audience associates with the unfolding storyline of each new episode.

The Westeros Sentinel is based on the (2018-12 release) of the webLyzard platform. It is not sponsored by or affiliated with HBO or any other organization involved in the production of the Game of Thrones television series.