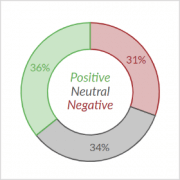 A significant portion of news and social media coverage contains opinions with clear economic relevance – product and travel reviews, for example, or the articles of well-known and respected bloggers who influence consumer purchase decisions. Analyzing and acting upon user-generated content is becoming imperative for decision makers who aim to engage with large user communities.

The ever-increasing amount of such user-generated content and the limits of human cognition require automated approaches to analyzing the sentiment expressed in such online content. As part of opinion mining, sentiment analysis identifies and aggregates polar opinions – i.e., positive or negative statements about facts. The results can be provided as data services, or in the form of visual tools that color-code the results to indicate the automated classification. Colors in the following examples range from red (negative) to grey (neutral) and green (positive). They vary in saturation, depending on the degree of polarity. Vivid colors hint at emotionally charged issues, less saturated ones a more neutral coverage.

Multilingual capabilities are becoming increasingly important when applying these techniques to global networks. This goes beyond merely detecting the language(s) used, a comparably straightforward task. It requires specific language resources (sentiment lexicons), and a system that is capable of processing grammatical structures and consider the idiosyncrasies of specific language communities.

Context-Awareness and Dealing with Ambiguity

The limited ability of automated systems to resolve ambiguities, for example to distinguish the term “apple” referring to an edible fruit  from the brand name of the technology company. Domain-specific knowledge and the ability to identify relations between semantic concepts are essential to address this problem.

While the 2013 IEEE article focuses on disambiguation and the generation of contextualized sentiment lexicons, the Knowledge-Based Systems article extends the method, using knowledge graph enrichment techniques to integrate external affective resources into the opinion mining process. The 2017 IEEE article increases the granularity of the approach by focusing on specific aspects such as product features (e.g., a digital camera’s resolution) or the perceptions of a specific event (e.g., as part of a sponsorship agreement). Another important extension is emotion detection, using more fine-grained affect models to distinguish a range of human emotions such as Joy, Trust, Anger and Fear.